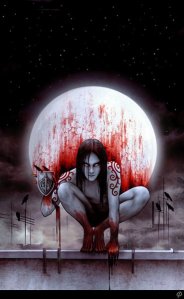 As a fiction writer, I find the thought of having to write ‘real world’ stories to not only be boring, but, in a sense, a bit scary.  To write a story based in this reality, I would have to play by the rules of this world, bound by its physics, science, and the simple truths that most of us take for granted.  But when it’s my own world, my own creation, I am no longer playing by the tried and true rules that bind mere mortals to this plane.  It is for this reason that I choose to create my own worlds, put my own twist on commonplace other-worldly creatures.  When you step out of this realm and into one that you have created, you are no longer playing by anyone’s rules but your own.  You are no longer just a mere writer, but a creator of something much larger and uniquely yours.  And it is for this reason that many people are just as scared of trying their hand at creating something outside of the normal realm as I am of trying to create something that ties me to this universal existence.

Creating your own world can be a very challenging but richly rewarding exercise into creativity.  While it takes a large amount of creativity to create characters and a good storyline in this reality, creating an entire universe and the physics behind that universe takes a whole new mind-set and, in its own way, a whole new creative level.  Think of it this way:  even if you create a superhero that exists in this reality, you will have to create a whole new set of laws that govern his existence.  What happens when this character jumps up, gets wet, goes out into the sunlight, or gets shot?  Now take this entire scenario and put it on some distance world that no one knows anything about.  Suddenly you are the one playing god, creating the physics, the rules, the laws that govern not only the world you have created, but how the creatures and characters in that world act, react, and interact.  It not only takes a lot of creativity, but it also takes someone who is very detail-oriented, someone who does not mind doing countless hours of research to see how they can intertwine this reality’s physics and science into something new and unique.  It takes someone who can not only see the storyline and characters that they are creating for this storyline, but all the possibilities that could come for future novels, for future characters, and for future events.

Creating worlds, for me at least, works much like the intricate root system of a tree.  It often comes in sparkling bursts, seeing the small plotline that I have created suddenly erupt and scatter out like the delicate tendrils of a spider web.  That one idea snakes out, building atop itself, mingling and intertwining in and amongst itself until that single storyline has fanned out into so many interlocking scenarios and characters that the sheer beauty of the whole series could make one weep with joy.  It is simplistic in its design yet so uniquely complicated at times that the whole process amazes me.

It is not only this love of complexity but also the love of creating worlds not known by mankind, memorable characters and eye-popping scenes that keeps me grounded in a reality that I have created.  It is the love of the creative process, the love of making up my own laws of physics and science that keeps me digging around in my brain for ways to make even the most clichéd storyline seem new and exciting.  After all, when you write fiction, you are stepping out of the normal realm and into a reality that is uniquely your own.  And if you are going to write, wouldn’t you rather write by your own rules?