If you tend to be a big reader, chances are you are constantly being fed sponsored ads in your social media feeds for BookBub and FreeBooksy. While these sites promise lots of free books, there are a few things you need to know as a reader.

First, the “free books” is a bit misleading. First, a lot of people misunderstand their ads and think you are getting free paperbacks. That’s not accurate at all. What you are actually getting is a listing of ebooks that can range in price from free to regular price.

The price of the book it is advertised for is also only good for the day of that newsletter run. So don’t be surprised if you find a supposedly “free” book being advertised in the newsletter only to click on it a day or two later to discover it is now regular price.

Second, there is no “vetting” process. Authors have to pay to have their books featured in these newsletters, and the price tag is hefty with a book that is selling at $3 or more costing the author a whopping $3983 for a single newsletter run. 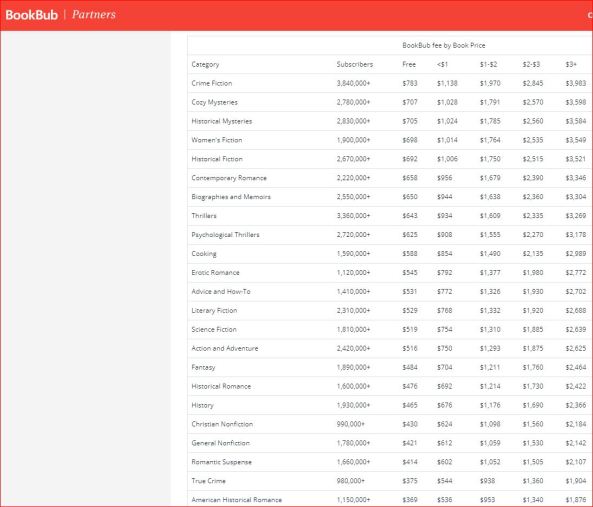 These sites aren’t vetting books for anything other than to see if they currently have a high rank on Amazon, and how many reviews they have. As previously discussed, a high-ranking on Amazon does not necessarily mean the book is any good. A disproportionate number of the high-ranking books are scammy, half-assed word vomit pushed out by book-mill “authors” looking to cash in and are paying click farms to “buy” or “borrow” their book in KU, thus artificially inflating their rankings. Also as previously mentioned, a lot of these books with an over-the-top number of 5* reviews are facilitated through fake accounts.

For this reason, those authors with the largest marketing budgets are the ones who get to apply for these spots. This means you are not always guaranteed a quality book. Add in the fact that a lot of authors purposely mis-categorize their books, and there is even less guarantee of what you will end up with in your newsletter.

So what is a good alternative? First, follow your favorite authors on Amazon to ensure you get updates on their new releases. Better yet, FOLLOW them on Bookbub rather than signing up for the BookBub newsletters. Whenever an author has a new release, you will get a short email from those authors you follow alerting you to a new release. Now, you need to understand that following an author on BookBub will only alert you to a NEW RELEASE from the author. Unfortunately, BookBub does not offer any way for authors to alert their followers of sales, etc. without actually paying BookBub for a newsletter spot.

A second good alternative is to follow the authors on social media. However, given the state of social media these days, the best way to find out what is going on is to sign up for your favorite authors’ newsletters. This ensures you stay up-to-date on all your favorite authors, their books, their sales, and what they are working on. You may even find yourself able to snag a coveted autographed paperback for less than the cost of a burger meal!

Book discounts from your favorite authors

Book recommendations from your favorite authors & readers you follow

Let’s just talk about how so many authors are so hell-bent on handing over fistfuls of money to BB (BookBub) for a “promotional” deal. For the longest time, authors sang the praises of BB as being the “cure-all” to their sale woes. Everyone claimed all it took to jump-start your career as an author is just land that coveted BB “deal.”

These days, with the market saturated and there literally being several hundred thousand free books available for download across multiple retailers, more and more authors are becoming aware of one simple truth – BB won’t help your sales. In fact, most authors report losing money on these BB deals.

For those authors who claim BB deals work, they often already have a fairly large reader base who are more than willing to buy their books. What they are actually experiencing is just regular sales from their fan base. They may or may not experience a bump in sales. And more times than not, these BB deals are stacked with other marketing and promotional ads going on simultaneously as the BB deals, making it practically impossible for them to measure exactly how well their BB deal actually did. All they know is they are getting sales, and they do not stop to really track down where those sales are actually coming from. It is this lack of investigation and blissful ignorance which BB continues to rely on to keep their business running.

Authors who claim BB deals were an utter failure for them often don’t stack their deal with other promotional ads, oftentimes having exhausted their small advertising budget with BB. (And with these prices, who could blame them?) When running only one promo deal at a time, it makes it much easier to really look at your numbers to see if a marketing venture is raking in a decent ROI or not.

But is it really worth it? Let’s break down the math, shall we?

The graphic at the top of the page shows the first few book genres, the size of that genre’s list subscribers, how much they charge for a free book (don’t even get me started on this thought process), for a $0.99 book, $1-$2 books, and those that are $3+. The last two columns are the book stats – the number of downloads you can expect on a free book on average, and the number of sells you can expect on a paid book on average.

Crime fiction has the largest number of list subscribers and has the second largest number of average expected sales on a deal. Obviously, you won’t get a return advertising a free book, so we are not even looking at those stats. But let’s say you discounted your $4.99 to just $0.99 That will cost you $1138 for your BB deal. Now, the average sales one can expect on crime fiction (which BB openly admits) is only 3180. If you do the math, that will net you just $1113 in average sales for your book when sold at $0.99 with a 35% royalty rate from Amazon. That is less than what you paid BB to advertise the book. Now, if you want to actually make money, you could toss $3983 their way and potentially gross over $8K in profits (netting around $4880 after you subtract the BB deal expense).

My biggest question – why would someone toss so much money at this company knowing they stand to not even break even?

These numbers are, of course, just estimates. But I find it incredibly strange that out of over 3.8+ MILLION subscribers, they are only averaging a few thousand sales on paid books. I seriously do not understand why authors rush out to hand over their cash for such shoddy results. It begs the question if anyone is actually sitting down, dong the math, and taking a hard look at these numbers. An average of 3K sales out of over 3.8 million is hardly what I would call “results” when it comes to paid advertisement, especially when I’m forking over upwards of $4K for said advertisement.

Another thing which really caught my attention is the number of average free downloads per category. Each one of these genres is pulling in average download rates of tens of thousands. Going back to crime fiction, out of 3.8+ million subscribers, the average download for free books is over 51K. When compared to the average books sold in that same genre, only around 3100, it shows just how huge of a gap there is. When comparing the average downloads of free books across the board, an alarming pattern comes to light – most people who subscribe to these BB newsletters are only in it to receive free books. It’s attracting the freebie-seeker, those who are usually only after free books, the type of reader who rarely becomes a paying customer.

The sad part? Authors are still tripping all over themselves to fork over hundreds of dollars just to have BB send their free book link to a bunch of readers who have no intentions of ever buying a book. So I once again ask – why do authors think this is such a good idea?

After looking at these figures, there’s one thing I know for sure – short of raking in close to a 7-figure a year income from my books, I can’t imagine any scenario where I would happily apply for a BB deal. Call me crazy, but when the ROI is this shitty, I’m going to look for more effective ways to spend my marketing dollars.