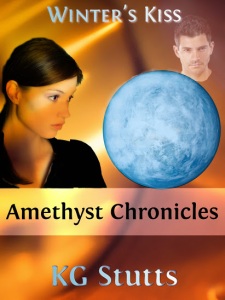 On November 21st, book one in a highly anticipated sci-fi novella series, Amethyst Chronicles: Winter’s Kiss launches from brought to you by KG Stutts, the author of the Mirror series. This is actually a spin-off, taking place over a thousand years after the third in Mirror trilogy, Mirror Reformed (out January 16th).

Amethyst is a secret team of genetically enhanced humans which is Earth’s greatest defensive weapon. Leading the team of super soldiers is Ember Wilson, a tough woman with a huge chip on her shoulder. The team gets their name from the after effect of the Genesis Project which turned their eyes and even their blood purple.

For decades, Earth has been ravaged by unpredictable weather which began to cause crops to fail. Most of the planet’s food sources have deteriorated. Dr. Clayton Rudo has proclaimed he has the means to save the soil. He has created a weather machine to regulate and help replenish. But Ember knew the truth. He didn’t want to save the planet. He wanted to control it. Amethyst destroyed the machine, but was placed in stasis. Two years later, Rudo recreated the device and has frozen Washington, DC and the west coast of the United States.

General Tom Blanchard brought Amethyst out of stasis to work with an elite Air Force team, led by Major Liam Ross. Tensions between Ember and Liam rise as they butt heads. Can they work together before Earth is completely under ice?

A lab technician carefully brought Ember Wilson out of stasis. Liam stood back as her team surrounded the final pod. Her violet eyes fluttered open and Liam’s hands began to shake. He couldn’t believe how stunning she was.

“What the hell?” she groaned.

“You’ll feel sick to your stomach for a moment, but it will pass,” Lewis informed her.

“My head,” she muttered, rubbing her temple. “What did that empty-headed, bureaucrat ass kisser Blanchard to do to me? How long have we been out?”

“Wilson, take a second to get your bearings,” Morris said.

“You’ll feel back to normal in a moment,” Nova added.

She scanned the lab, coming to a stop the moment her eyes locked on the General. Her foot pressed against the back of the pod, her eyes wild with anger.

“You son of a bitch!” she yelled as she used her foot to launch herself in the air.

Nova and Morris caught her before she could reach Blanchard. She kicked and screamed for freedom but the duo wouldn’t budge. She jerked against the hold they had on her arms, spitting and cursing.

“I know,” Lewis calmly said as he stood in front of her. Her foot was inches from his chin when she kicked. “Hey, it’s okay. I know. But there are more pressing matters at hand than him.”

“Rudo?” she asked through gritted teeth.

“You moron!” she shouted, looking over Lewis’ shoulder to Blanchard. “You had the chance to stop it before he could act but you were too much of a coward!”

“Sorry? Sorry?” Her voice was nearly shrieking. “Not yet, but you will be.”

“Wilson, Rudo used the weather machine,” Nova stated, his face contorted as he strained to keep his hold on her.

“Of course he did! And now we’ve got to clean up the mess.”

“Whatever problems you and I have aren’t important right now,” Blanchard said.

“You got that right,” she snapped. “I’m going to finish what I started and kill Rudo and maybe you’ll be lucky not to meet my blaster.”

“There’s no cause for that,” Liam spoke up.

Her purple eyes looked upon the Major for the first time. He instantly regretted interrupting. She stopped struggling against Nova and Morris. A low growl rumbled from deep in her throat as her eyes narrowed. He shifted uncomfortably, fidgeting with the hem of his dress blues. The coldness in her eyes made him shiver.

“Who’s the uniform?” She nodded in his direction.

“This is Major Liam Ross,” Blanchard introduced. “His team will be working with yours on this mission.”

“Absolutely not.” Ember shook her head as Nova and Morris let go of her arms. “We’re all you need.”

“I don’t give a flying monkey’s butt what Packer says.”

“This is bigger than your raid on Rudo. You need the man power.”

“No one else could’ve broken into the compound! We don’t need or want the help.”

“I know. The leader of the Luteus team still isn’t one hundred percent after the skirmish your two teams had.”

“It was a training exercise. Besides, if Mark is still healing after all this time, he should spend time in a therapy tank. That’s not my problem.”

“Regardless of how you feel, this is the situation. Or you can be put back into the stasis chamber.”

“Not on your life.” Ember’s lips twitched.

Wilson turned to Ross again, sizing him up. He was tall and, judging by the way his Air Force blues molded to him, was very muscular. His brown hair framed his handsome face but didn’t touch the collar of his impeccably clean uniform. Soft brown eyes were watching her intensely.

“Can your pretty boy even hold a blaster?” She questioned Blanchard, nodding toward Liam.

“Direct your inquiries toward me.” Liam stood up straighter.

“I’ll have you know that I’m the number one ranking sharpshooter in the world,” he told her.

“It’s cute you think like that. Rankings don’t mean shit,” she said. “Scores on a piece of paper are useless in the field.”

“I assure you, Major Ross and his five squad members are more than capable of the task,” the General said.

“Five?” The members of Amethyst began to laugh.

“You need a squad of five?” Ember chuckled. “Rookie.”

“You only need three on your team?” Liam incredulously asked.

“Aw, thanks, Wilson.” Nova grinned. “That may be the nicest thing you’ve ever said to me.”

Ember’s eyes burned into the Major’s as she continued to assess him.

“All right, pretty boy. Let’s see what you and your boys can do,” she said. “Collect your squad and meet us in the training center.”

Look for Winter’s Kiss available for pre-order on October 30, 2014.

Visit KG Stutts on the web.