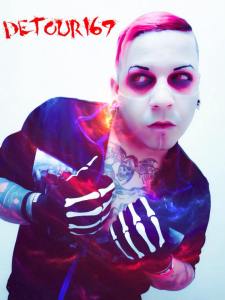 Today The Alternative Underground sat down with Russell Pluss, the mastermind behind the underground cult sensation, musical artist Detour169. For those who have not heard of D169, you are missing out of some of the most unique, cutting-edge music in the industry today.

Russell handles absolutely everything for his projects, the original “one-man show” if you will, from conception to completion. All of the photos included in this piece were taken and created by Russell. He is his own makeup artist and graphic artist. He creates, writes, records, and mixes his own music, markets and promotes, and even performs live shows.

In addition to being his own marketing manager, he founded Dead Nation Records, an independent label dedicated to helping market and promote other underground artists. It’s amazing everything he has learned to do over the years, and we are very lucky to have him carve out a few minutes in his tight schedule to speak with us.

Russell, I’d like to thank you for taking a few moments to discuss your career and your new release. Sore Thumb is scheduled to be released soon. How many albums have you released to date?

Sore Thumb is still to be announced for the release date. I have (technically) four albums available currently. “Vizionz” is my first. It was my debut in the horrorcore rap scene. “Book Of The Dead, Vol.1” is my second. It’s about the time I first started to experiment with different styles, and genres. The Third/fourth is “Mind of a monster.” It is a double disc album that featured a cd of all rap, and the other being all rock. These albums are going to be released separately, and the double album is only available at live shows. I am also part of a horrorcore rap group called “Tha Jokaz”, and have been for 8 years.

How would you describe your music? Is there any specific genre you feel your music fits into more than others?

I describe my music as “dark rap meets synth rock”. 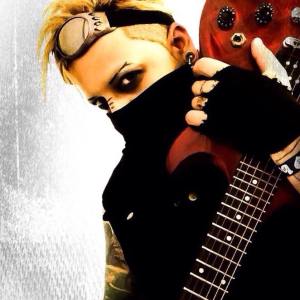 Who are/were your musical influences?

What all types of instruments do you play?

I play guitar on stage sometimes, and I produce my own music, so I play everything from keyboards, guitars, to drums and more.

How long have you been writing and producing music?

I have been producing my own music from the start, which started 15 years ago, tho I was known back home in Connecticut as a guitar prodigy. 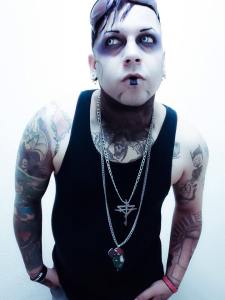 Dead Nation Records is your own label. What is the story behind its creation?

Dead Nation is a label I started because I had to find a place where I actually belonged musically, and my story has been a tough one, and I want the label to be a place where others who have a unique sound and look can fit in, a place where the dark beauty of music goes unjudged, and appreciated!

Do you have any plans to sign with a more traditional record label?

I would love to sign with a major label, but Dead Nation Records will always be there, and will grow.

What motivates you to keep going in the industry?

What motivates me into continuing what I do is that I love the beauty of the art. Music is emotional, and can be created to tell any and every thing! I am a story teller, so in a way, I view my songs as an “audiobook”, because I can give the listener a mental image of what I am singing about.

Most people wonder why I look and sound the way I do. My answer is is: I am Detour. I go in different directions all the time. I don’t listen to the radio. If I want to hear a song, I just make it. There is a beauty in writing all different types of styles. I am versatile. 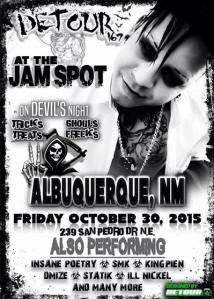 Catch Detour169 at THE JAM SPOT on October 30th.

Follow Me on BookBub!
Join My Vampire Fix Group
Get ARC Alerts on BookSprout
Join the Supernatural World of Nicola C. Matthews